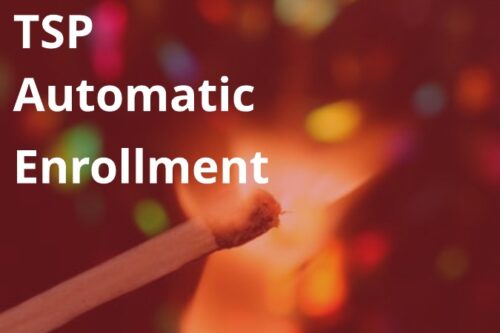 This article was originally published November 14, 2019

When a federal employee comes aboard in his or her agency, they are automatically enrolled to contribute 5% of their gross salary to their Thrift Saving Plan (TSP) account. 5% is also the highest amount for which a match will be received. This match is often called ‘free money from the government.’

Here’s a refresher regarding how the TSP match works:

First, your agency contributes 1% of your base salary to the TSP no matter what. You can call this a “match” but they’ll make this deposit for you even if you’re not contributing yourself. So, yes, this 1% is technically an additional amount on top of your salary. If a Fed makes $50,000 per year- their agency is putting an extra $500 in their TSP every year.

Next, you’ve got the actual matching from your agency. If you put in 3% of your pre-tax pay into the TSP, the agency you work for will match up to that 3% dollar-for-dollar. So for our hypothetical employee mentioned above, he or she can put in $1,500 (3% of $50,000) into their retirement savings account and the US Federal agency they work for will also put in $1,500.

Then, if an additional 2% is rationed off for the TSP from your salary, the agency won’t keep matching 1-for-1, but they will put up 50 cents for every dollar contributed… until reaching 5%. Going back to our example worker: if they contribute 5% of their annual pay to the TSP, they’ll get the $1500 for the 3% and then a $500 match for the other 2% ($1000) personally committed.

This sounds simple enough, but as expected, there’s a catch that is often overlooked: the federal government will require you to divide this 5% contribution evenly over a calendar year’s 26 pay periods, if you want the full match. To avoid overcomplicating things, just remember the match somewhat operates on a per-paycheck basis, and matching contributions will not exceed the match that would be given if a Fed evenly put 5% of their pre-tax biweekly paycheck into the TSP. See the table below:

Basically, if your mathematical instincts compel you to get “cute” with how you contribute to the TSP- then you could lose the full match (remember– free money) from your agency.  In scenario 2 here, our imagined Federal worker decided to contribute the 5% as quick as he can afford ($300 biweekly). One look at the totals ($2000 v. $692.31) demonstrates how this aspect of TSP contributions can prove devasting to one’s retirement. The difference ($2000 – $692.31) of $1,307.69 might as well be chalked up as a loss. Compounded over a decade or two, that’s when the losses become detrimental.

Keeping all of that in mind, the FRTIB (Federal Retirement Thrift Investment Board) changed the automatic enrollment for new hires (and re-hires who were gone over 31 days) from 3% to 5% in October 2020. This should help bolster the retirement funds of newly acquired federal workers. However, what if a new Fed doesn’t want to contribute 3%, 5%, or anything at all? First off, they would need to fill out and submit Form TSP-1 electronically. Then, if they want a refund for what had been automatically contributed on their behalf, form TSP-25 will help them accomplish this, but it must be submitted within 90 days of joining the Federal workforce. Lastly, if a Fed quits working for the government after less than 90 days, and their TSP account is valued at $200 or more, they can receive a refund as well. Neither types of refunds include the agency matches, they consist solely of what was contributed automatically from the employee’s salary.

*Once the TSP Modernization Act went into effect, all of the internal TSP forms such as the TSP-1 and TSP-25 became solely electronic. Also, Catch-Up amounts no longer have to be re-elected at the beginning of every year as it used to be. Because of the 2017 TSP act, elections to make Catch-Up Contributions will now carry over into the following year.

As not to make one’s head spin, assuming it isn’t spinning a little already, we won’t introduce the Roth TSP account into this article. For information about the Roth TSP, check out Serving Those Who Serve’s TSP Report!