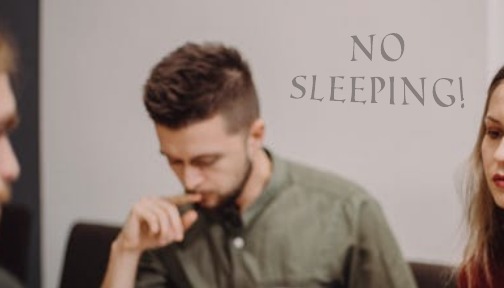 What is most interesting about the notice that the GSA (General Services Administration) posted throughout Federal workplaces is that… they published and distributed the reminder at all. Clearly, if someone thought it necessary to distribute an announcement to the millions of Americans throughout the Federal Government’s workforce, reaffirming the policy that “sleeping is not allowed” … then, somewhere, it must have been an issue. The “Supplementary Information” from the OPG’s (Office of Government-Wide Policy) “Federal Management Regulation” notice indicates “GSA has received questions regarding the permissibility of sleeping in Federal buildings.” So, at the least, someone was maybe sick of their commute, looked around their office building, and seriously considered sleeping out the night in a Federal office building. Or, maybe an office-wide naptime was suggested?

Surely, though, if one is tired, they can rest their eyes in the breakroom?

The GSA notice is explicit in communicating that snoozing in the federal buildings is not allowed unless an agency official authorizes it. The two exceptions that may warrant such authorization include

a.) the sleep is necessary to conduct official government business, and

b.) it is an emergency where imminent danger to human life or property could occur otherwise.

So much for getting that hammock…