GSA 2021 Per Diem Rates for Lodging, Meals, and Incidental Purchases 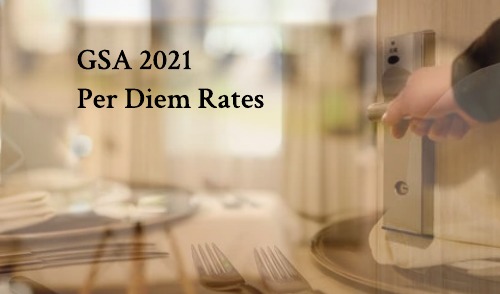 The General Services Administration (GSA) recently announced that the per diem rates for lodging, meals, and incidental purposes will be the same as the 2020 figures. For expenses federal employees incur while conducting government business within the continental United States, the per diem rate will stay at $151. Going off of the industry average reported by lodging companies, $96 of the allotted amount can be used for lodging while the remaining $55 can be spent on meals and ‘incidental expenses,’ which include fees and tips that are paid to, according to GSA.gov, “porters, carriers, hotel staff, and staff on ships.”

Although the amounts remain unchanged from 2020, there were some adjustments made to the standard rate list. The per diem rates mentioned above encompass approximately 2,600 counties in the country. However, there are 319 locations that are categorized as ‘nonstandard,’ where different, area-specific rates apply. Last year, there were 322 such locations but for 2021, 4 will be moved from ‘nonstandard’ to standard while Albuquerque, NM will transfer to the ‘nonstandard’ designation. The 3 that will no longer be considered ‘nonstandard’ will be: Gainesville, FL, Atlantic City, NJ, College Station, TX, and Abingdon, VA.

Social Security for Feds: the W.E.P. & the Earnings Test

Federal Pay Raise on Track for 2021