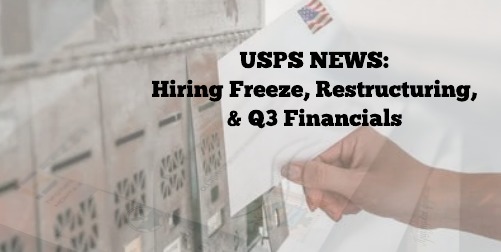 Louis Dejoy, the new Postmaster General who started at USPS on June 15th, continued to engineer several fundamental changes at the postal service. Last month, a new program rolled out across over 300 post office localities that is designed to limit costs such as overtime, despite possibly delaying mail delivery. Now in August, it has been announced that a hiring freeze has been placed on all management positions at the agency. Along with this action, a restructuring of the organization’s three overarching departments was also revealed as having commenced. The units that comprise one of the oldest agencies in the nation are ‘retail and industry,’ ‘logistics and processing operations,’ and ‘commerce and business solutions,’ all of which just received new leadership as part of Dejoy’s plan.

The mail service as well just reported its financial figures for the 3rd quarter of the fiscal year 2020. Losses overall were roughly cut in half when compared to the 2nd quarter’s numbers, going from $4.4 billion to $2.2 billion. Revenue went down, too, but by around $700 million, from $17.8 billion in the previous quarter to $17.1 billion. The revenue was collected from package delivery services, which spiked 60%, and also from first-class mail and advertising. Both first-class mail and advertising revenue dropped, though- by 6.4% and 37.2%, respectively.