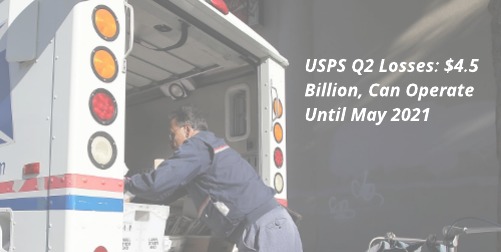 The USPS announced to its employees that it has enough liquidity to operate at full service until at least May 2021- so the agency’s collapse may not come as soon as October 2020 as once thought. The Federal Agency was hit hard by the global pandemic with the volume of paper mail dropping 30%- this accelerated the path to bankruptcy, which was already looming to hit around 2024. The Q2 financial report of Fiscal Year 2020 for the postal service shows a $4.5 Billion loss (almost doubling the $2.5 Billion loss from Q2 2019) and $17.8 Billion in revenue (actually up almost $350 million from the same timeframe last year.) Without delving into the functional limitations imposed on the organization, these statements can seem bafflingly contradictory. A law passed in 2006 forces the USPS to prefund an employee health benefits fund by 75 years, and the payments have been defaulted since 2012. As well, Congress controls the prices that the agency can charge. Therefore, the losses have more to do with budgetary restrictions than the operations of the service itself.

A 2017 postal reform bill would have largely helped the agency’s financial condition, but a cascade of unfortunate events led to the legislation’s collapse. First set to pass in 2016, minor grievances from some members of the Senate committee reviewing the bill delayed it getting through to the floor for a vote. The attempts to revive the potential law failed due mostly to a tumultuous year for Congress, which was caught in a political whirlwind surrounding Healthcare reform. Also working against the potential reform was the lobbyist support, having leaned on Democrats too heavily in 2016. The next presidential administration and the incoming 115th Congress was Republican. The President was also tweeting negative remarks about the USPS’ relationship with Amazon, a company disliked by Trump because they own The Washington Post. The late Maryland Congressman, Elijah Cummings, was a strong advocate of the Postal Service Reform Act of 2017.

The USPS can continue servicing the country until May 2021 largely because of a $10 Billion line-of-credit made available through the CARES Act. It has asked for a $75 Billion bailout from Congress, but the President has claimed if the bailout is included in any further relief bills, he would probably veto that bill. The President also recently selected the next Postmaster General, Louis DeJoy, who will take over as head of the agency on June 15th.