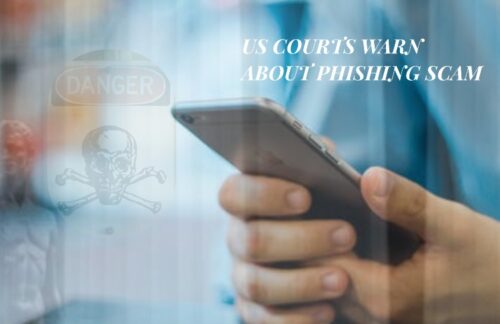 US Courts Scam: The Administrative Office of US Courts issued a warning about an emergent scam involving fictitious arrest records~

Robocalls are among the most prevalent methods used by scammers who are phishing for unsuspecting victims. There are many variations of these phone calls, but the criminal on the other end sets up a recording of some sort and then blasts the robotic message to as many receivers it is capable of. The audio will typically be a very obvious recording, with a twist. The con-artists who develop these types of auto-dialing systems figured out how to personalize each individual attempt, most commonly using the potential victim’s actual name. These annoying robots calling us usually pose as debt collectors, but have been known to impersonate IRS employees, other feds, service processors, and police officers.

The US Federal Court system recently warned about a new strategy the scammers are using- pretending to be the US Court system. The recording reportedly mentions a ‘magistrate judge’ and then the digitized voice notifies the answerer that he or she could possibly face jail-time for either refusing to appear for jury duty, or pay court fees. The message then provides a number for you to call back at, or less often, asks you to press “1” to speak with a specialist. At this point, you should hang up. If you do move to the stage where you’re talking with a real person, the scammers have a tendency to be pushy and act as though this matter is extremely urgent. In the recent case involving the Federal courts, the con-artists were using real court documents and case numbers, even if they then proceeded to lie through their teeth about any money due, or action needed, from the victim’s end. Because phishing works by potentially obtaining someone’s private information, like bank account numbers, the large red flag emerges when the faux-representative asks for payment or such private data. No Government agency of any Federal branch will ever call you directly and then ask for any information or payment. If unsure, hang up once this red flag pops up and call a local federal court clerk who can confirm any business you may or may not have with the Federal Courts.

As with similar schemes, this trap works by preying on ignorance because if the target knows how the actual system works- whether that be the US Court system, IRS collection system, or whichever institution the robocall is impersonating- then the game is up. Staying informed is one’s best defense.