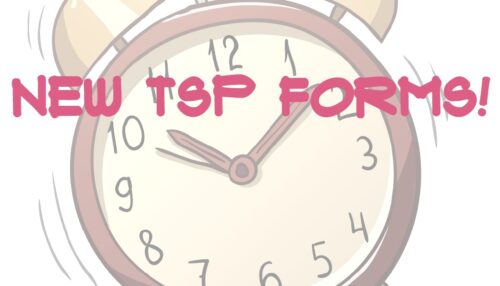 The timeline associated with the TSP Modernization Act could begin as early as 2003, when an internal memo first highlighted some concerns that were eventually addressed by the newly enforced legislation. For all intents and purposes, our timeline will start with Congress passing the bill in 2017. Almost two years later, the law is now effective. An untrained eye may perceive the two-year span as much too long, but those familiar with the inner-workings of the Federal Government would know that getting the Act’s stipulations implemented in such a timeframe is actually relatively impressive. However, two years in Government time is still empirically two years, which is more than an adequate duration for the Government to notify its own employees about impending changes directly brought forth by Federal laws. Still, agency representatives were not officially informed about several new forms and online tools that have in turn made previous forms and processes obsolete until the day of. The TSP Modernization Act went into effect on September 15, 2019, and on that very same day, TSP employees were informed of the modifications. The technology was planned for completion on September 7th, just nine days before going live online, so chances are there was a decent amount of last-minute scrambling.

With all of that being said:

-The TSP-25: Automatic Enrollment Refund Request has been updated.

-The TSP-60: Request for a Transfer Into the TSP was also updated.

-The TSP-60-R: Request for a Roth Transfer into the TSP was updated, too.

-The TSP-75: Age-Based In-Service Withdraw Request has been replaced by an online tool.

-The TSP-76: Financial Hardship Withdraw Request is now an exclusively online tool, too.

-The TSP-99: Withdrawal Request for Separated and Beneficiary Participants is a new online tool that replaces-

The TSP-95: Changes to Installment Payments replaces the following with an online tool-

And lastly, the TSP-70A: Late Request for Full Withdrawal has been made obsolete by the new form, TSP-94: Request to Restore an Abandoned Account.

Need help with your TSP? Schedule a meeting or Contact Us