TSP Gets a Makeover …So What’s the Big Deal? 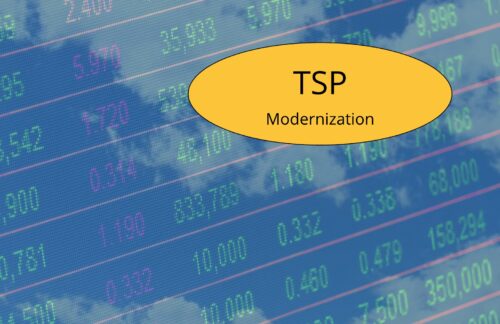 The Thrift Savings Plan (TSP) is widely discussed throughout the Federal Government’s workforce, and that might be because it is so difficult to comprehend. Luckily, the TSP Modernization Act was signed into law in 2017, and will take effect on September 15, 2019. While things might still be difficult to fully understand, the upgrade will certainly make accessing your retirement money less frustrating than it can be now.

Here’s an overview of the upcoming changes:

Greater Withdrawal Freedom. Federal employees older than 59½ will be able to make four annual withdraws per year, and retirees can take one post-service sum every thirty days. This is a drastic improvement from the one-time-only withdraw option that has been in effect since the 1980s. You’ll also have the ability to choose whether or not you’re withdrawing from a Traditional or Roth account. This improvement is also a welcomed one when contrasted against the old set-up.

There Will Be a Blackout Period. All withdraw activity from TSP accounts will be suspended as the prior laws phase out and the new regulations go live. From September 7th to September 14th, participants won’t have access to their retirement funds. This shouldn’t be a headache for too many people. However those planning to retire this year, or those who will be recently retired by the end of the summer, should ensure that TSP receives their properly completed forms by the 6th of September.

No More “Abandonment Issues.” Currently, Required Minimum Distributions (RMD) are not automatically initiated upon reaching age 70½. On the first April after turning 70½, the federal retiree has to decide whether to receive all of the TSP money as a lump sum, take unalterable monthly payments, or purchase a life annuity. If actions aren’t taken by the TSP accountholder within the given time, the account is considered abandoned and all of the money is moved into the G Fund. Once the TSP Modernization Act kicks in, a participant over RMD age can leave their account as is and it will not be deemed abandoned. The only thing that will occur is the automatic start to the IRS mandatory withdrawals. Under the old laws, the RMDs are not sent automatically.

While these changes are designed to, and in many cases do, greatly enhance the TSP as a retirement savings plan, the additional rules and regulations risk causing more confusion as well. Talking with your financial advisor regarding your TSP can possibly prevent costly mistakes that sprout from hasty, uninformed decisions.

TSP Gets a Makeover – TSP MAKEOVER