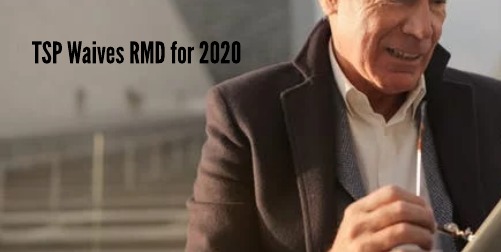 Here we are 3 to 4 weeks into quarantine and the world is changing fast. One major positive change is people and companies are committing to push out more communication and information to help those in need. In addition to OPM, TSP has also created a page highlighting changes as they happen.

In line with other 401ks plans, TSP is allowing participants to forgo taking their RMD for the year via the recent CARES act. TSP will suspend automatic RMD payments for 2020 as well. Participants may still take distributions from their account if they chose.

This is a great move by TSP to follow suit of other 401ks, because remember TSP looks like a 401k, acts like a 401k, but is not in fact, a 401k. TSP was designed under its own legislation and guidelines, which makes it not subject to ERISA like 401ks. That means TSP could have chosen to not allow this temporary delay in RMDs.

This decision is a major advantage for participants because distributions from TSP are sent pro-rata from the invested funds. For example, if your TSP is allocated G20% F30% C25% S15% I10% and you are requesting $1,000- the TSP is going to pull those funds in proportion to the allocation, i.e. 25% of the withdrawal will come from C, 15% from S and 10% from I, etc. That means you will be selling the funds that have taken the biggest hit in the market. The exact opposite of “sell high, buy low”.  Taking distributions from asset classes that have been hit the hardest could have a devastating impact on your retirement portfolio.

TSP is working to make improvements to catch up to modern times. Examples include creating more flexible distribution options in 2019, broadening the I fund to include more asset classes, and working to help participants in the crisis. Unfortunately, those changes are practically decades late. 401k plans have had similar options in place since inception and most allow for greater investment selection. Now, this doesn’t mean TSP is terrible, we would say that there hasn’t been a better time than now to be able to include TSP in your retirement planning. A good financial planner will be able to show how to maximize the opportunities in the vehicles you have.

TSP is a simple cheap plan to manage and keep in retirement. However, sometimes you get what you pay for. TSP by design is always behind- the CARES Act was signed on March 27th, TSP announced RMD suspension on April 13th. Having the right strategy makes all the difference.

Stay safe and remember it’s your FedLife make it a great one.

Wes Battle CFP®, AIF®, ChFEBC™ is a senior financial planner with Serving Those Who Serve who specializes in working with the Senior Executive Service of the Federal Government. Wes provides retirement services to and seminar speaking to Federal Agencies. To connect with Wes you can find him online or at wes.battle@stwserve.com