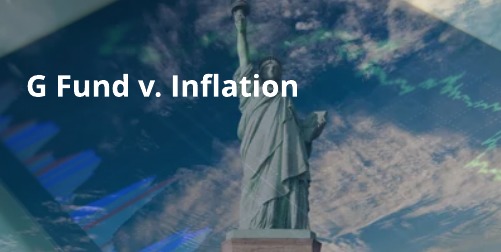 The G-fund is an interesting investment as it is only available to Federal employees who have a TSP account, and that the Government guarantees its return will never be negative. Because it derives its value from the average yields of all Government treasuries, it is described as being a better savings vehicle than similar government securities like T-Bills. Although short-term government paper has generally low rates, the idea is that the long-term rates of 10-year and 30-year treasuries will be higher and thus lift the G-fund’s value. However, the gap between yields of short and long-term investments of this nature has been shrinking over the years and this pushes back against the G-Fund’s ability to match inflation and therefore maintain purchasing power.

After its first full calendar year since its inception, which was 1989, the G-Fund provided an annual return of 8.81%. This was practically double that of the country’s economic inflation that year, 4.41%, as gauged by the Consumer Price Index (CPI).  This trend slowly dwindled by the end of the 1990s, though. From 2000 to 2010, the average difference between the G-Fund’s growth and inflation was just 2.01%- which is not bad considering the G-fund beat inflation each year. Then in 2011, for the first time since the TSP was started in 1988, the annual return of the G-Fund (2.45%) was less than the inflationary growth for that year (3%). The trend continued into 2012 when the 1.47% return from the G-Fund was again outpaced by the CPI, which was at 1.7%. Inflation was higher again in 2016, 2019, and so far in 2020 with a .21% difference currently between the two.

The G-Fund is generally touted by the Federal Government as a safe investment because of the guarantee not to go negative and the exclusivity to participate. But if unable to keep up with inflation, the appeal lessens as the purchasing power of a federal employee’s retirement money could be sorely impacted.

G-Fund when Matched Against Inflation