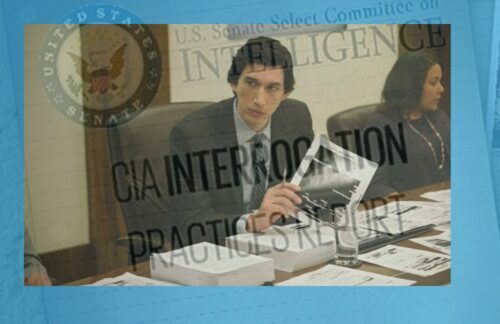 Released by Amazon Studios and currently available through Amazon’s streaming service, or on Blu-Ray, “The Report” is about a civilian Federal employee who worked for the Senate’s Intelligence Committee from 2009 to 2012. Tasked with investigating the CIA’s Detention and Interrogation Program, Daniel Jones’ report revealed the CIA had used inhumane and cruel techniques in the aftermath of the September 2001 terrorist attacks. Not only that, the report, which came to be known as “The Torture Report,” made strong a case in arguing that the CIA had lied to both Congress and the Department of Justice regarding their Detention and Interrogation Program. More scathing, the report contained strong evidence showing their violent methods were practically ineffective. The CIA had defended the more deplorable actions by claiming the information they attained was invaluable to national security. This report contradicted that claim.

Daniel Jones is played by Adam Driver (Star Wars), who is joined by a talented cast that includes Annette Bening (Cpt. Marvel), Jon Hamm (Mad Men), and Michael C. Hall (Dexter). The movie has received 83% on Rotten Tomatoes. The last notable movie about a federal employee was 2016’s ‘Hidden Figures’ about Katharine Johnson of NASA. Starring Taraji P. Henson and Octavia Spencer, that film made almost $170 million at the box office and received 3 Academy Award Nominations.