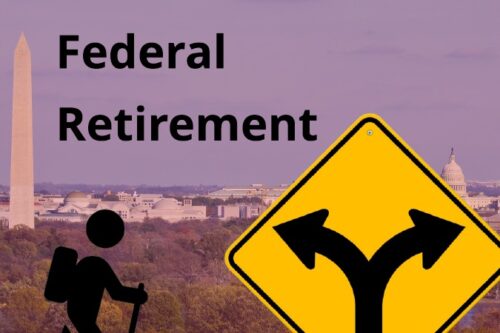 Determining how much savings and future income is needed to comfortably retire can be an arduous process for anyone. For federal employees, however, the variables involved can be even more overwhelming as there is a plethora of avenues to consider with fluctuating degrees of complexity involved. Sometimes one path can seem only subtly diverged from another at first, but further down the trail, a significant split in differing directions can have unexpected consequences. As most participants in America’s workforce approach their 60’s, there are basic determinations to make towards retiring. Items to ponder include at what age to begin drawing social security benefits, how much retirement savings should be taken monthly, and what state (or even country) to live in. Tax implications, personal preferences, and logistical practicality are all interwoven within the outcome of each choice.

In addition to these selections, along with several others, federal employees face a daunting amount of decisions. What to do with FEGLI, FEHB, accumulated leave, and the TSP, along with deciding when to file retirement claims with OPM, offer a couple of examples that detail how retirement from the Federal Government’s civil service can quickly become a complicated process. Those who embrace the easiest route often find obstacles further along that could’ve been avoided at the onset. One could possibly write a capacious manual with multiple volumes and thousands of pages regarding the nuances, pitfalls, and hidden gems laden in the options available to a federal employee when it comes to retirement benefits, so this attempt at shaping a rough idea should not be considered an all-encompassing guide to federal retirement.

Deciding when to leave federal service, in terms of both the calendar year and an individual’s age, usually reveals itself as a heavily significant choice. Regarding when in a given year to file a claim for retirement benefits, the general consensus has formed around the date of December 31st. The reason pertains to annual leave and how 240 hours is the maximum to carry over year-to-year. Retiring in December, therefore, allows the 240 carried over plus hours accrued in the current year, which may be as high as 208. The 448 total, equivalent to working for over 50 days, is disbursed as a lump sum immediately upon retirement. Another bonus laden in leaving in December is that some of these hours may get calculated at the following year’s pay rate. The resulting payout can provide financial relief during the following months as pension payments don’t begin for a few months because of a sizable backlog of retirement claims at OPM. Interestingly enough, a vast upswing in claim submissions at the end of each year has been identified as the main culprit for this inconvenient bottleneck of forms waiting to be processed, but Iron Mountain is its own monster altogether.

What Age Makes All the Difference

The specific age at which one decides to retire can have an extensive impact on the way their federal pension amount is calculated. For FERS and CSRS employees who possess less than twenty years of service, waiting until 62 or later is the only way to be eligible for the pension, assuming they worked for a total minimum time of 60 months. The decision about what age to retire becomes stickier if a Fed has at least 20 years of service by the ripe age of 60, or even 30 years at their minimum retirement age, which varies depending on the year of birth. To exemplify this, let’s explore some hypothetical situations with two different fictional FERS workers, each with 22 years at 60.  Let’s say our first employee is named Bobby and he decided at 61 to retire and take the Special Retirement Supplement (SRS) for a year. The immediate gain by Bobby, assuming his supplement was $900 per month, is $11,000. Our other Fed, who we’ll call Sally, determined she’d be better off retiring at 62 with no SRS payment. The extra year comes with an advantageous 1.1% multiplier for her pension calculation, however, while Bobby’s pension payment will be computed with a multiplying factor of 1.0%. Sally’s annual payout in retirement will be her high-3 average ($100,000) x years of service (24) x 1.1%, which equals $26,400. Bobby may have the same high-3 average, but with one year less (23), multiplied by 1.0%, giving him an annual benefit of $23,000.

Checking back in on Bobby and Sally after they’ve both been retired for 15 years, Bobby has collected $345,000 plus the SRS payments received during his first year, so $356,000. In contrast, Sally has earned $396,000 in total, providing a difference of $40,000. This purely theoretical pair of situations demonstrate the magnitude of seemingly innocuous decisions made in the moments just preceding retirement.

Age can impact your retirement in another way, with RMDs (Required Minimum Distributions). If still working when older than age 70½ – you qualify for a “still working exemption” when filing your taxes and don’t need to take an RMD that year (in most cases). However, you do need to begin taking RMDs the year you retire- even if you didn’t retire until December 31st. What this means is someone who retires when they’re 70½ or older may end up having to take two RMDs the following year to compensate for the one not taken when they were “still working.”

Along with the questions that arise due to timing, numerous aspects of the federal benefits package are loaded with complexities that can feel arguably unnecessary, but the apparent vacancy of logic should not discount a choice entirely. The rules in place hold credence, and although the answer as to why they are shaped in complicated manners can be elusive, such does not discredit their ability to enhance or abate a person’s financial realities in retirement. As every fed’s situation is different from the next, it’s probably best to sit down with a professional, like a Chartered Federal Employee Benefits Consultant (ChFEBC), or at least attend a seminar to learn about your Federal Retirement Benefits.