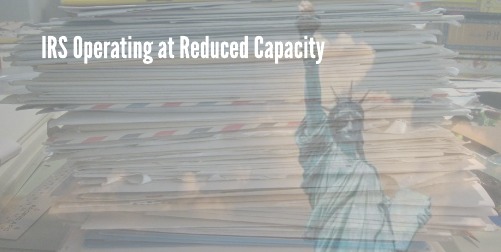 Tax Refunds Delayed: Due to teleworking Feds and the CARES Act Stimulus Payments, the issuance of some Tax Refunds are being Heavily Delayed

Buried between the lines of an April 3rd memo from the Treasury Department, the IRS states that due to their employees teleworking, tax returns that have been mailed and not sent electronically to the Internal Revenue Service (IRS) are not being processed at this time. In addition to this, stimulus payments being issued from the CARES Act have also diverted resources that typically would be utilized for processing incoming returns. Even with the Federal Agency able to process about 3 million (electronically filed) tax returns per week, this figure is still significantly lower than last year, when the IRS was functioning normally. So, the COVID-19 pandemic has hit the agency with a one-two punch. First directly, through social distancing, the IRS workforce is primarily telecommuting and unable to retrieve, and therefore process, the 10% of overall returns which are paper documents physically mailed to a processing center. Second, more indirectly, the Government’s response to the virus’ economic impact was the CARES Act- which required the agency to allocate and distribute $2 trillion to a hefty chunk of the population of American adults. While it typically took 8 to 21 days after an electronic return was received for any refund to be deposited into the taxpayer’s bank (or for a US Treasury check to be mailed), that timeframe has been elongated. And the IRS, playing it safe, has not disclosed how much longer. One thing is for certain, though: if the tax documents were mailed, it will take a much longer time than if they had been e-filed.

*The IRS has also explicitly stated that if you already mailed yours, not to send a second copy electronically.