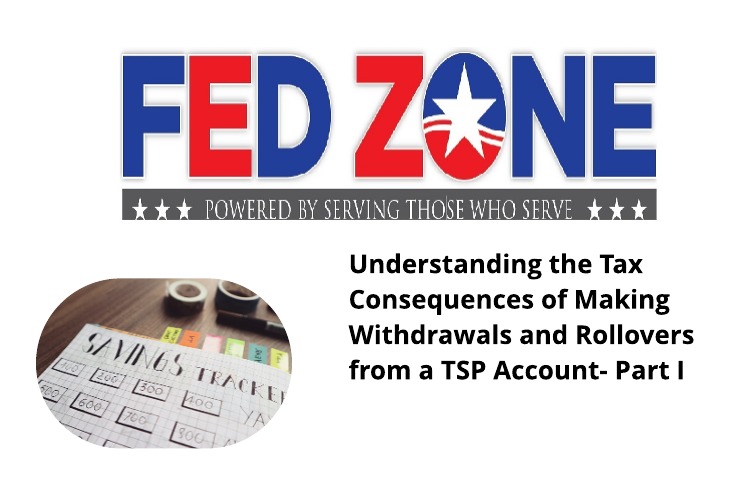 In order to fully understand the tax consequences of withdrawing money from one’s TSP account, it is important to first review some retirement definitions and TSP information and rules.

· “Distribution,” “payment,” and “withdrawal” all mean the same thing, namely: Money a TSP participant receives via check or direct deposit from his or her TSP account.

· “Eligible rollover distribution” simply means a type of distribution from the TSP that the IRS allows to be rolled over into another retirement plan or into an IRA.

· “Transfer” and “rollover”. These are two ways of moving funds from one retirement plan to another. A transfer is sometimes called a “direct rollover” and is moved directly between accounts. A rollover is first sent to the retirement plan owner before the owner deposits it into a retirement account, generally within 60 days of receiving it.

How TSP Payments Are Taxed

In general, payments from a participant’s TSP account get taxed depending on whether the participant has traditional TSP money, Roth TSP money, or both. Note that members of the uniformed services may also have tax-exempt pay included in their accounts, as a result of contributing their pay while serving in a combat zone.

(2) earnings. A Roth TSP participant has already paid income tax on the money contributed to the TSP account. This means that the Roth TSP withdrawals are not taxed. With respect to the Roth TSP earnings, these earnings will not be taxed upon withdrawal only if the distribution is qualified (see above “qualified” distribution).

Payments That Include Both Traditional and Roth Money

Sheila makes a withdrawal of $1,000 from her account. Sheila is 58 years old and does not have a permanent disability. What portion of the $1,000 distribution is considered taxable income?

Explanation of taxable income: The traditional TSP portion is all taxable. So are the earnings in Sheila’s Roth TSP balance. The portion of the $1,000 withdrawal that came from Sheila’s Roth TSP account ($50) is not taxable regardless of Sheila’s age or the amount of time that has passed since Sheila first made a Roth TSP contribution. However, the $950 consisting of the $800 traditional TSP is fully taxable as is the $150 of the Roth TSP earnings since the Roth TSP distribution is not “qualified”. The $150 is also subject to the 10 percent early withdrawal penalty unless Sheila is covered by an exception, as explained below.

A TSP participant who receives a TSP distribution before the participant reaches age 59.5 may have to pay – in addition to the regular income tax – an early withdrawal penalty tax equal to 10 percent of any taxable portion of the distribution not transferred or rolled over. The 10 percent additional tax generally does not apply to payments that are:

· Made as a result of total and permanent disability

· Made because of death

· Ordered by a domestic relations court; or

· Paid as substantially equal payments over the participant’s life expectancy.