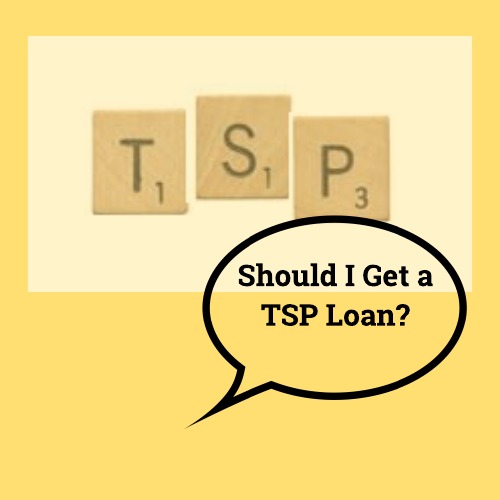 Your TSP balance should be saved for retirement, if possible. So should I get a TSP Loan? Probably not.

Just about anyone with a Thrift Savings Plan (TSP) has wondered, “Should I Get a TSP Loan?” It is a legitimate question because they make them sound very attractive. You hear your friends and colleagues say: “You are just borrowing from yourself?” or “You are paying yourself interest, not a bank.” or “The interest is far cheaper than any bank loan.” It can be tempting.

But, spoiler alert, you should probably not get a TSP loan.

Why is that the case?

Let’s start with a TSP loan primer. You are allowed, if approved, to take a loan of your TSP balance and repay the loan with interest equal to the current G fund rate (approximately 2% right now). You repay the loan through payroll deductions and, if you leave government service, the loan is due in full within 60 days. The nitty-gritty of TSP is for another post.

Now, let’s look at the 5 reasons you should not get a TSP loan:

1) You are losing potential gains on the money you are borrowing. In business, this is known as an opportunity cost. It is the amount of profit you could have made if you chose to use your money for something else. For instance, if you bought Stock A instead of Stock B, and Stock B outperformed Stock A by $10,000, then $10,000 is the opportunity cost. If, instead of taking a loan, you kept your money in a fund in the TSP – especially one that isn’t the G fund – the amount of gain it would have seen is your opportunity cost. For instance, the L Fund for retiring in 2040 has averaged 10.68% growth over the past 5 years (as of Dec. 2017). If you loaned yourself $5,000 to be paid over 5 years during that time, your opportunity cost would be $3,304. Of course, if the fund(s) you would have invested in lost money during that time, you could be ahead of the game. But that is something you can’t reliably predict.

2) You are paying yourself the “gain.” Your money, while you are repaying it, is “growing” at the G fund rate, which is really just keeping up with inflation – hopefully. But, you are paying that, not someone else. The magic of investing is that someone else is paying you to use your money – something you miss when your TSP loan.

4) You are paying taxes twice on the interest. One advantage of TSPs and traditional IRAs is that your contributions are not taxed until they are withdrawn. However, if you have a TSP loan, the amount you contribute back into the account is from post-tax income and then is taxed again when it is withdrawn.

5) Your loan balance could become due suddenly. If this day-and-age, employment is much less certain, even in Federal service. If you leave the Federal government, your balance becomes due within 60 days or it will be considered an early withdrawal and you will not only owe income taxes, but a 10% penalty if you are younger than 59.5 years.

6) If you do not make payments on time, your loan could be due immediately. Similar to leaving Federal service, you would have to pay income taxes plus a 10% penalty if you are younger than 59.5 years.

Okay, I admit it – there could be situations where a TSP loans ends up making sense. But, they are few and far between, and you won’t really know until after the fact – for instance, if there is a massive bear market while you are repaying your loan.

You do want to consider all of your options when considering a TSP loan or other financing options. Don’t make a decision in the dark.

If you would like to know more or have additional questions, please call us for your complimentary consultation.

Wes Battle CFP®, AIF®, ChFEBC™ is a senior financial planner with Serving Those Who Serve who specializes in working with the Senior Executive service of the Federal Government. Wes provides retirement services to and seminar speaking to Federal Agencies. To connect with Wes you can find him online or at wes.battle@stwserve.com