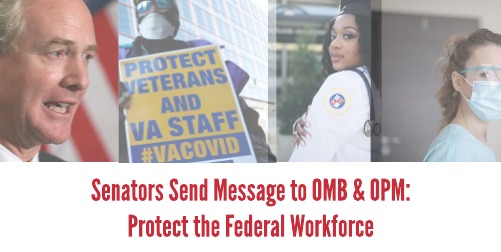 19 Senators, including 2 Republicans and an Independent, Led by Maryland Senator Van Hollen, Calls for Hazard Pay and additional Protections for Federal Employees

On May 6th, Republican Senators Collins (Maine) and Murkowski (Alaska) and the Independent Senator from Maine, Angus King, joined 16 Democrat Senators led by Maryland’s Van Hollen in calling for hazard pay and additional protections for Federal Employees. Addressed to the Office of Management & Budget (OMB) and the Office of Personnel Management (OPM), Van Hollen said the point of the message was to urge the executive branch “to do more to use their existing authorities.”   While Hazard Pay is currently available to some Feds, the letter written by the 19 congressmen calls for the 25% pay bump to be expanded for all Federal Employees who are on the frontlines battling the COVID-19 crisis. The American Federation for Government Employees (AFGE) recently sued the Government along with three federal workers over hazard pay. When the lawsuit was filed back in March, the AFGE publicly commented that they hoped Congress would resolve the matter before the Justice system had to make a decision on this issue.

The correspondence reemphasizes that the availability of adequate amounts of personal protective equipment and cleaning supplies is still a pressing concern for a wide array of the Federal workforce. Also highlighted is the need for maintaining the Federal Government’s own CDC social distancing guidelines- which means maximizing telework and not sending Federal workers back to offices that are not yet safe in regards to preventing further spread of the Coronavirus. This was included because Feds have voiced related safety concerns about being called back to worksites. The IRS recently ordered around 10,000 of its workers to return to their offices. The letter to OMB and OPM notes that one of the emergency relief bills, already made into law, freed money for Federal agencies to strengthen and expand capabilities related to teleworking. Clearer guidance on “safety leave,” and permission for federal agencies to allow more flexibility to their employees in accommodating for childcare and other domestic matters, were two items the Senators accentuate in relation to working from home.

For Federal Contractors, the message mentions a provision in the recently enacted CARES Act that provides agencies with the authority to reimburse paid leave given to the contractor’s employees. The money is available in cases where facilities were closed due to the pandemic that struck the United States hard in the middle of March. Again, the main point of the correspondence was to urge the executive branch to provide leadership on these matters as they have with items such as FEGLI paperwork, Recruitment Incentives, and Premium Pay.

In related news, another Republican Senator, Joni Ernst (Iowa) called for hazard pay for service members who are involved in the COVID-19 response. Ernst, a Veteran herself, also echoed a previous statement from AFGE, which was a plea for legislation that would “provide hazardous duty pay to all front-line federal employees not already covered by existing laws like our nurses in federal prisons, and healthcare workers at the VA.” As of May 6th, 62,800 service members were helping efforts to manage the crisis. Almost 6,000 total service members  – including 889 from the National Guard – have contracted the Coronavirus with two cases proving fatal.

TSP: Skip the Notary & Come Get Your Money