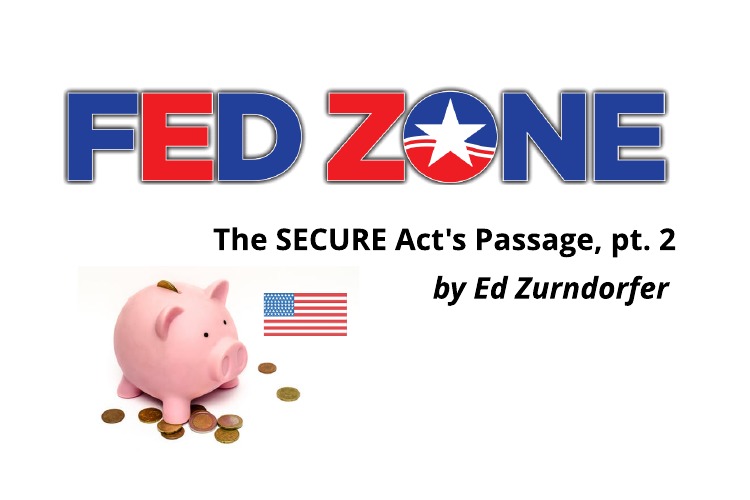 Before adjourning in late December, Congress enacted a $1.4 trillion year-end spending bill that keeps the federal government running through Sept. 30, 2020. President Trump signed the legislation. Tucked away inside this spending legislation is the Setting Every Community Up for Retirement Enhancement (SECURE) Act which includes significant changes to individual retirement arrangements (IRAs) and retirement plans, including the Thrift Savings Plan (TSP). In the second of two FEDZONE columns discussing the SECURE Act, this column discusses the most important estate planning changes resulting from the SECURE Act passage.

Perhaps one of the most important changes made by the SECURE Act for many individuals is the elimination of the “stretch” provisions for most non-spousal beneficiaries of defined contribution plans and IRA accounts. Until the SECURE Act’s passage, individuals designated as beneficiaries (generally living humans and certain qualifying trusts) were eligible to stretch distributions over their life expectancy (or in the case of a qualifying trust, over the oldest applicable trust beneficiary’s life expectancy. For example, a 25-year-old beneficiary could stretch required minimum distributions (RMDs) over nearly 60 years.

Eligible Designated Beneficiaries Not Subject to the New 10-Year Rule

The SECURE Act carves out exemptions for certain beneficiaries not subject to the new “10-year rule”. These exemptions are called “eligible designated beneficiaries”, or EDBs. EDBs are:

●Minor children up to the age of majority (but not grandchildren)

●Individuals not more than 10 years younger than the IRA owner (generally, siblings

around the same age)

Joseph is the owner of a traditional IRA and names his 10-year-old son Max as the beneficiary of his IRA. Joseph dies in 2020. Max can still “stretch” the IRA as was done pre-SECURE Act (over Max’s life expectancy of approximately 75 years). But that lifetime “stretch” is only until Max becomes age 18 (which is the age of majority in most states). At that time, Max is no longer an EDB and then is subject to the new “10-year rule”.

Why IRA Trust Planning Has to Be Revisited

Those individuals with the largest IRAs (IRAs worth more than 1 million) will be the most affected by this provision of the SECURE Act since these individuals are most likely to have named a trust as their IRA beneficiary. They did so in order to control distributions to their beneficiaries and to preserve the IRA for decades after death. Note that there are many TSP participants with over 1 million in their TSP accounts and who have transferred their TSP accounts to IRAs and named trusts as beneficiaries.

With an Accumulation Trust, the trustee has discretion on whether to pay out the RMDs to the trust beneficiaries or retain those funds in the trust in order to protect and preserve the funds. If the funds are retained in the trust, then the funds will be taxable to the trust and trust tax rates are much higher than individual tax rates. Of course, this is not an issue with a Roth IRA in which there is no tax on distributions from the inherited IRA to the trust.

The problem now is that with the passage of the SECURE Act, the payout is limited to 10 years for non-eligible designated beneficiaries. With the conduit trust, there will be no RMDs except at the end of 10 years after death. At the end of 10 years, the entire balance in the inherited IRA will be paid out to the beneficiaries, resulting in no funds being protected to the trust and leaving beneficiaries with a huge tax bill as a result of a lump sum payment of traditional (taxable) IRA funds. With an Accumulation Trust, the IRA funds would have to be paid to the trust by the end of 10 years. The funds could all remain in the Accumulation Trust and be protected inside the trust but at what cost? All funds remaining in the trust and will be taxed.

The End of the “Stretch” IRA May Not Be the Last of Retirement Tax Breaks to Go on the Chopping Block.

The curtailment of the “stretch” IRA may not have been the last of the retirement tax breaks to be enacted by Congress. There are four more proposed eliminations or limitations on retirement tax breaks that are circulating in Congress, some of which have around for more than five years. There is no way to predict which of the following will be enacted, when they will be enacted, and in what form. But federal employees and uniformed service members should keep these proposals in mind when planning for the future and by all means, stay flexible.

As a result of the SECURE Act passage, IRS rules require RMDs for individuals age 72 and older (those individuals born after June 30, 1949; otherwise for individuals over age 70.5) from traditional IRAs and not from Roth IRAs. Proposed rules would require RMDs from Roth IRAs for those age 72 and older. This could result in opening the door for “indirect” taxes, such as when tax-free income (like municipal bond interest income) is included in determining how much an individual pays for Medicare Part B each month.

●Limit the value of deductions for traditional IRAs and 401(k) plans (including the TSP).

Under current IRS rules, amounts contributed to deductible traditional IRAs and to traditional defined-contribution plans (401(k) plans, 403(b) plans, SIMPLE 401(k) plans and the traditional TSP) are fully tax-deductible. One proposal in Congress would limit the value of these deductions for higher earners. The proposal says qualified plan retirement plan and deductible traditional IRA savers would get no more than a 28 percent deduction – even if they are in a 33 percent, 35 percent or 37.6 percent federal marginal tax bracket. In other words, for high wage earners, the tax break for contributing to these qualified retirement plans would be diminished.

●Limit the size of qualified retirement plans and IRAs.

This proposal would stop an individual’s contributions to qualified retirement plans (including the TSP) and IRAs once the accounts reached a certain size. Further growth through investment earnings and gains would be allowed. The proposal would not require those who already have more than the limit to withdraw the excess.

It should be emphasized that these are proposals. Congress and President Trump have not passed any of them into law. But employees and annuitants should keep them in mind when planning and saving for their retirement.

Edward A. Zurndorfer is a Certified Financial Planner, Chartered Life Underwriter, Chartered Financial Consultant, Chartered Federal Employee Benefits Consultant, Certified Employees Benefits Specialist and IRS Enrolled Agent in Silver Spring, MD. Tax planning, Federal employee benefits, retirement and insurance consulting services offered through EZ Accounting and Financial Services, and EZ Federal Benefits Seminars, located at 833 Bromley Street Suite A, Silver Spring, MD 20902-3019 and telephone number 301-681-1652. Raymond James is not affiliated with and does not endorse the opinions or services of Edward A. Zurndorfer or EZ Accounting and Financial Services. The information has been obtained from sources considered to be reliable, but we do not guarantee that the foregoing material is accurate or complete. While the employees of Serving Those Who Serve are familiar with the tax provisions of the issues presented herein, as Financial Advisors of RJFS, we are not qualified to render advice on tax or legal matters. You should discuss tax or legal matters with the appropriate professional. Unless certain criteria are met, Roth IRA owners must be 59½ or older and have held the IRA for five years before tax-free withdrawals are permitted. Additionally, each converted amount may be subject to its own five-year holding period. Converting a traditional IRA into a Roth IRA has tax implications. Investors should consult a tax advisor before deciding to do a conversion.