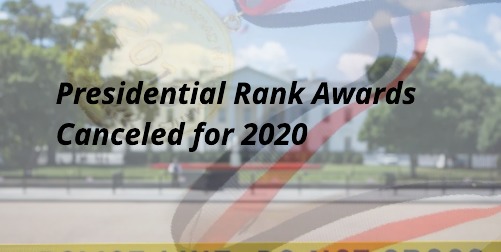 The Presidential Rank Awards were Canceled for only the second time in its 41-year-old history. The first time was in 2013 during a recession.

The Trump administration canceled the Presidential Rank Awards for 2020 claiming that focus and resources were needed for reopening Federal agency offices. The financial strain caused by the COVID-19 disaster apparently means the government can’t afford either to recognize its hardest workers among the senior executive service (SES) or to give them the award’s accompanying cash bonus.

What Are the Presidential Rank Awards (PSAs)?

The Senior Executive Service began in 1979 and so did the awards. By law, no more than 1% of the entire SES can receive the awards. Recipients are first nominated by their agency heads, then evaluated by a panel of citizens, and lastly chosen by the President. As of June 2019, there were a little fewer than 2.1 million civilian federal workers with only about 8,000 SES members, so roughly 0.004% of the whole federal payroll. 1% of 8,000 means only about 80 individuals can get this award. The cash bonuses received equate to anywhere from 20% to 35% of an awardee’s salary, depending on if the honor is classified as ‘distinguished’ or ‘meritorious.’ In 1998 and earlier, the cash bonus was always $20,000. In recent years, the highest amounts received hovered around $60,000. The aim of the PSAs is to recognize strong leaders, professionals, or scientists, and the total cost for these awards is less than $4 million (approximately 0.0000009% of total US Government spending in fiscal year 2019).

Federal Compensation Should Not Be Politicized

The precedent that was set by President Obama in 2013 was done so based on ‘optics.’ Amidst a recession, while undergoing sequestration of federal programs, the President thought it would look bad to award cash prizes to members of the top tier of civilian public service, who already make a six-figure salary. Although the current executive branch purported the Coronavirus emergency as the reason for the 2020 PSA cancelation, it may very well be about optics again. It may not look good to some to give out cash awards to senior executives when the country’s economy is battling against the fallout of a pandemic, but poll numbers and political appearance shouldn’t dictate the recognition of those who demonstrated superb talent within a narrow scope of an elite group. Especially with the pandemic, there are surely some individuals of the SES group who have worked, and are working, tirelessly and courageously for this country throughout the battle against COVID-19. They deserve to have their contributions recognized, not subjected to politicization. As Federal News Network suggests, the government could still disburse the awards without paying the bonuses until the following year.

The Hatch Act mandates that while performing duties as an apparatus of the Federal Government, an employee cannot endorse any political party or candidate- no matter how small the endorsement. In the same respect, the federal workforce’s pay and recognition should not be impacted by the arena of partisan politics and the like. The 1% pay raise for feds that the President placed in his 2021 budget came with guidance that said agencies should focus less on across-the-board raises and more on awarding high-performing individuals. Canceling the PSAs contradicts these sentiments, which makes the cancelation itself more unsettling.