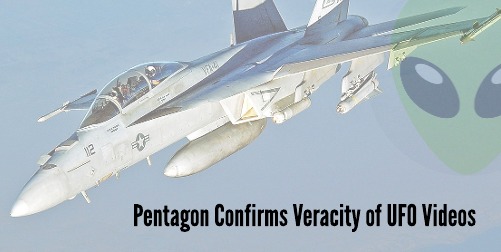 The Pentagon declassified footage that had already been leaked to the public in 2017. The three videos are from Navy test flights and show unidentifiable flying objects.

The earliest video released by the Department of Defense (DoD) last week is from 2004 and is known commonly referred to as the “Nimitz Incident.” The footage was taken during a training exercise in the Pacific Ocean off the coast of southern California. An F/A-18 fighter pilot completing the exercise for the Navy captured the incident. The USS Nimitz, our nation’s older aircraft carrier, is where the name comes from. The video itself, which was officially declassified recently, is known as ‘FLIR1’ and shows the F/A-18’s recording from its infrared targeting system. The object, confirmed not to be an “unidentified flying object” (UFO) but an “unidentified aerial phenomenon” (UAP) is oblong-shaped and, as the Navy pilot approaches it, shoots off at “unprecedented” speeds when the footage ends.

The next two videos that the Pentagon released to the public are from 2014 and 2015 training exercises conducted from the USS Theodore Roosevelt off the east coast. The video entitled “Gimbal” features two of the pilots excitedly speaking to each other- “Look at thing, dude!” They note that there is a “fleet” of the objects even though only one is visible in the footage and also observe the UAP is “rotating.” The two Navy pilots can also be heard wondering if the thing is a drone or possibly another entity- but the conversation is inaudible at parts. What is discernible is when the pilots remark about the UAP going against the wind, which is blowing “120 knots to the west.”

Also off the East Coast, the last video is known as “Go-Fast” and depicts the apparent “unbelievable” speed of the UAPs. The Government has admitted that the velocity of these flying objects is beyond the capabilities of any known military or government drone- and that’s what is the most disconcerting aspect of the declassified videos. With a clear oceanic backdrop providing a frame of reference for the entity’s speed, the third video starts with the UAP zooming across the screen, over the water, until the Navy’s targeting systems locks onto the target. “Look at that flying!” he exclaims.

Several reports surrounding the story revolve around insinuations that these UAP sightings are increasing in frequency, but that has not been confirmed. All the public has to go off of, officially, are the three videos approved for declassification last week despite getting released to the public in 2017. The declassification is important, though, because it confirms the videos’ veracity. These are not hoaxes, but actual untampered recordings from US Navy F/A-18 Super Hornets. Also revealed in 2017 when the videos got leaked, was that a  pentagon shadow program had been conducted, and secretly funded by $22 million in “dark money,” to investigate the threat of the UAPs. The “Advanced Aviation Threat Identification Program” existed between 2007 and 2012. Whether the objects captured on film are of extraterrestrial origin, an international power’s super-technology, and some sort of unexplainable natural phenomenon, lawmakers are starting to take it seriously. A spokeswoman for Virginia Senator Mark Warner said, “We can’t ask our pilots to put their lives at risk unnecessarily.”