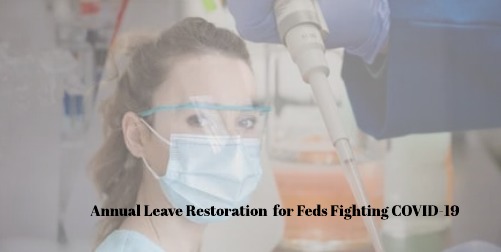 OPM announced they will restore annual paid leave to feds responding to the pandemic, and will make the process easier than usual.

Annual leave is important for federal employees to keep an eye on, because for many new retirees, the lump sum received at the onset of retirement acts as a supplement for their estimated annuity. While retirement paperwork gets processed at Iron Mountain in Pennsylvania, which can take up to six months or even more, FERS and CSRS annuitants receive an estimated pension that is 30 to 40% less than what they can expect to be paid after their retirement claims are finalized by OPM. While the money that was left out of the estimated check is reimbursed, this doesn’t happen until after the claims are processed. However, an employee’s paid leave can act as a supplement if they’ve garnered enough hours. The maximum amount possible to accumulate is 448 hours as only 240 annual leave hours can be carried over at the end of each year. (This is also why conventional wisdom tells feds to retire on 12/31 of any given year, causing a yearly uptick in OPM’s backlog of pending retirement claims) So with the 240 hours carried over from their next-to-last year until retirement plus the 248 hours possible saved in their final year, 448 hours could be paid to a new retiree in a sum equal to their hourly rate times the 448 hours or their other accumulated total hours.

There are a few cases, though, where these annual leave hours can be restored. If there is an administrative error that needs to be fixed, or if an employee becomes very ill, there is a chance some of these hours will be added back to their overall total. The third way this type of restoration is possible is if their leave had been canceled due to an “exigency of the public business.” The Coronavirus crisis has created such an urgency for a large portion of the nation’s civil servants, and OPM confirmed this month that they will be streamlining the process for restoring annual leave for feds who are the frontlines of fighting the pandemic. Leave canceled before the start of the third-to-last biweekly pay period of the year will be eligible for restoration and agency heads will be lawfully required to notify which of their employees to which this is applicable. For feds not directly involved with the federal government’s response to COVID-19, but who became seriously ill, there might be some annual leave given back, but it is unclear if their process will be alleviated of the same administrative burdens that streamlining is set to avoid.  The director of OPM, Michael Rigas, made the announcement along with claiming accompanying regulation would soon follow, but no timeline was provided.