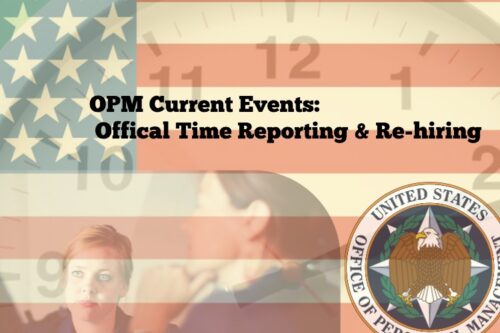 The process for hiring Federal Workers is referred to as the “competitive hiring process” where all candidates are evaluated in a manner meant to limit any bias. The end goal is to get the best candidate for the job, based on experience and other objective factors, regardless of their age, race, gender, etc. While those close to the methodology may tell you the system is far from perfect, it works more-or-less sufficiently, even if not efficiently. One of the issues with the system revolves around potential re-hires. Anyone who left Federal service and wishes to return at a higher paygrade has to apply along with everyone who is vying for that position.

The current rules decree that a Federal employee who left their job can only avoid the standard competitive process by reentering the government at the same point on the pay-scale as when they left… or lower. Otherwise, the candidate has to re-enter the gauntlet of the standard resume review process. A rule proposed on December 23rd by OPM is looking to change that. The regulation would allow for re-hires to be considered outside of the competitive hiring process as their time away is often used to garner even more work experience either at school or in the private sector. This is part of OPM’s efforts to make hiring (and firing) feds less arduous. Last year, both the Dept. of Health & Human Services (HHS) and the National Park Service (NPS) tested pilot programs to explore alternative hiring processes to identify qualified candidates.

Other current events involving OPM include a January 31st deadline for agencies to report “official time” – which is how much time a federal employee may use their paid time to work on behalf of a labor union for Feds. In the past, how individual agencies reported the time to OPM was non-standardized. Now, every agency must submit a systemized form that indicates such factors related to the official time like: the purpose of the time (term negotiations, dispute resolutions, etc.), the amount of time used, and the job title of the employee. All the information is to be submitted to OPM by the end of the month. A more detailed list can be found here