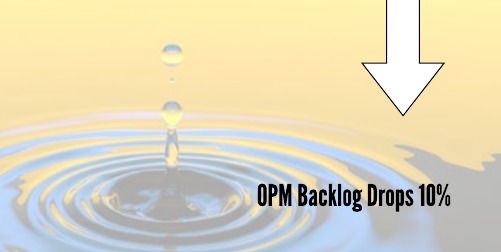 The process for handling claims for Federal retirement benefits is performed in a defunct limestone mine in Western Pennsylvania called Iron Mountain. Those familiar with the facility know the staggering number of files housed underground there is a result of the Federal Government’s inability to digitize the procedure- which in turn stems from the complexities laden within the benefit packages for FERS and CSRS employees. Because December 31st (or January 3rd for CSRS) is commonly considered the ideal date for starting one’s retirement from federal service, there is always a noticeable influx of claims in January. The first month of this decade saw approximately 3,000 more incoming retirement claims than January 2019, in fact. February saw a reversal of that trend as February 2019 had more than 10,500 new claims submitted while the second month of 2020 was closer to 9,000. The impact of the coronavirus is visible in the March numbers. Compared to March 2019’s 10,000 or so incoming claims for federal retirement benefits, this March was in the 6,000 range- a rough difference of 4,000. OPM has assured that the process for handling these claims for benefits will continue normally, and this explains the 10% drop in the overall backlog. With processing supposedly uninterrupted by the global pandemic (only 696 fewer retirees’ claims were processed than in the previous month) combined with a stark slowdown of incoming forms- the infamously large backlog (nowhere near its notorious 2012/2013 figures) experienced its healthiest decrease in a while. Perhaps it is taking longer for the trucks to collect and deliver retirement forms to Iron Mountain, or maybe feds are holding off on retirement for one reason or another related to the virus (health benefits, TSP concerns, for example), or some combination of the two. With the COVID-19 crisis impacting so much of normalcy, it is hard not to think the slowing of claims is at least somewhat related.

**Written by Benjamin Derge, Financial Planner. The information has been obtained from sources considered reliable but we do not guarantee that the foregoing material is accurate or complete. Any opinions are those of Benjamin Derge and not necessarily those of RJFS or Raymond James. Links are being provided for information purposes only. Expressions of opinion are as of this date and are subject to change without notice. Raymond James is not affiliated with and does not endorse, authorize, or sponsor any of the listed websites or their respective sponsors