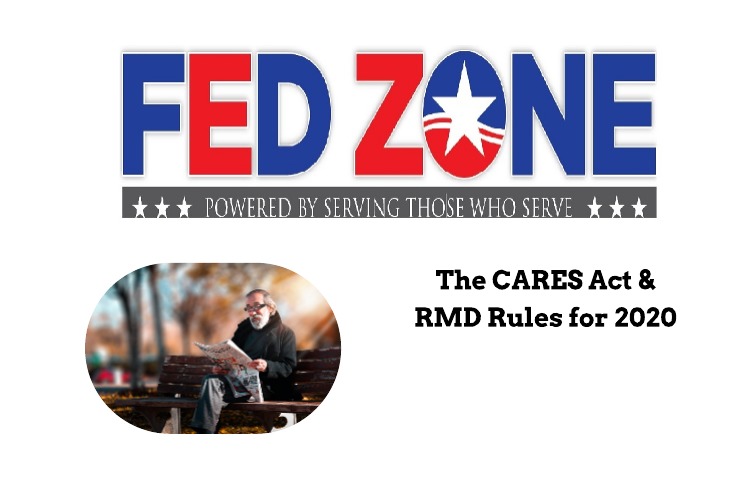 A previous FED-ZONE column discussed the passage of the Coronavirus Aid Relief and Economic Security (CARES) Act, which became law on March 27, 2020. One of the provisions of the CARES Act is the suspension of required minimum distributions (RMDs) for 2020 “across the board”. This means no RMDs for traditional IRA owners, qualified retirement plan participants including the Thrift Savings Plan (TSP) participants (all of whom are over age 70.5), and inherited traditional IRA and inherited Roth IRA owners of any age. Since the CARES Act passage, there have been numerous questions about what the 2020 RMD suspension means – including questions from federal annuitants about their TSP RMDs, as well as questions from those IRA owners and qualified retirement plan participants who already have taken their 2020 RMDs and the impact on federal and state income taxes. The TSP on its Web site explains the temporary changes to TSP RMDs for 2020.  This column answers additional questions about the RMD suspension for 2020 resulting from the CARES Act suspension.

What does the 2020 RMD relief entail?

The CARES Act also deals with specific types of inherited accounts such as those accounts going to an estate, charity or certain type of trust at death. These types of beneficiaries – they are designated beneficiaries who inherit a retirement account from a decedent who died before their required beginning date, typically have to distribute the account within five years of the death of the owner. The CARES Act states that if one of those five years is 2020, then these beneficiaries get an extra year, meaning the “five-year rule” becomes the “six-year rule.”

What happens if an IRA owner or retirement plan owner already took an RMD for 2020?

The answer is that for anyone who already took his or her 2020 RMD prior to March 27, 2020, they are likely out of luck. There is no provision in the CARES Act that allows a traditional IRA owner or a qualified retirement plan participant, including a federal annuitant over 70.5 with a TSP account, to return or redeposit a distribution taken earlier in 2020. The distribution will be treated as a taxable distribution for the year 2020.

But there is a strategy that an individual who took an RMD from a traditional IRA or from a defined contribution plan (including the TSP) within the last 60 days that will allow them to avoid paying income tax on the previously taken RMD.

With respect to the TSP, two important facts should be noted about TSP RMDs. First, the TSP makes it clear that no portion of TSP RMDs can be rolled over to traditional IRAs. However, since the CARES Act suspends RMDs for 2020, then any pre-CARES Act TSP RMD (which is per-CARES Act is now not considered an RMD) is eligible for a traditional IRA rollover.

The second important fact about TSP RMDs is that the TSP will automatically withhold 10 percent in federal income taxes from the RMD. This means that in the example above in which the annuitant requested a $30,000 RMD, the annuitant received only $27,000 since $3,000 was withheld in federal income taxes. However, the TSP participant still has to rollover (deposit) the full $30,000 into the traditional IRA by April 20, 2020. This means that the TSP participant has to come up with the other $3,000 before April 20, 2020 in order to avoid having to pay income taxes on the full $30,000.

Only one 60-day rollover per 12-month period

The federal government waived financial companies and retirement plan providers – including the TSP – from giving a formal rollover notice. The federal government also waived the requirement for an employer-sponsored retirement plan to withhold 20 percent of the distribution for federal income tax, if the distribution is an eligible rollover distribution in 2020 but would not have been eligible if the RMD requirement had still applied in 2020.

TSP participants who do not need their RMDs for 2020 need not contact the TSP to send them any RMD for 2020. But if they err and request a payment, they can, in most cases, do either a direct transfer from the TSP to a traditional IRA or they can use their “once every 12 months” 60-day rollover.

For those federal annuitants who become age 70.5 during 2019 (that is, they were born between July 1, 1948 and June 30, 1949), their first TSP RMD had to be taken before April 1, 2020 (their “required beginning date”). According to the CARES Act, all RMDs during 2020, including those for individuals who became age 70.5 and who a required beginning date of April 1, 2020, are suspended. This means that any 2019 TSP RMD due to be taken no later than April 1, 2020 is also suspended. But it is important to note that the TSP has a general policy that if a federal annuitant with a TSP account has a required beginning date of April 1 but has not taken the RMD by March 1 (or if March 1 is a Saturday or a Sunday, on the last business day of February) then the TSP automatically sends the RMD to the TSP participant.

Does the SECURE Act “10-year” distribution rule get impacted by the RMD suspension?

The CARES Act does not directly impact these non-spousal beneficiary inherited IRA accounts. But instead of lifetime distributions for many beneficiaries starting in 2020, there are no RMDs or 10-year distribution rule in effect, yet. The 10-year period starts in the year of death of the IRA or of the retirement plan owner. This means if someone died on Jan. 2, 2020, and wanted to leave their IRA to their adult child, the “10-year” rule starts in 2021. The beneficiary has until Jan. 2, 2031 (not Jan. 2, 2030) to withdraw the entire account. If the original IRA or retirement plan owner’s account was subject to RMDs, one would normally have to take an RMD for the year of the death. If the death occurred in 2020, like the example above in which the IRA or retirement plan owner died Jan. 2, 2020, no RMD would have to be taken because of the CARES Act.