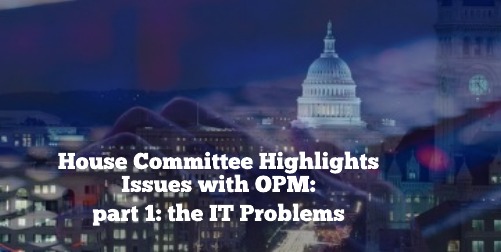 Issues with OPM: The IT Problems

The three points that the committee expressed that regarded IT exclusively were:

Other issues involving IT were also mentioned, but in addition to another topic under review.

Regarding the FEVS (Federal Employee Viewpoint Survey), which has been delayed this year due to the coronavirus, the committee wanted OPM to examine the practicality of conducting the annual survey via a mobile app, thus making it more convenient for most feds. Despite the current delay, the congressional group criticized the normal time it takes for the FEVS to be administered (about 6 weeks starting in May) and for the results to get to management (not until October, at the earliest).

The OPM backlog of retirement claims was mentioned by the committee as well. Most federal retirees are familiar with the infamously long duration it takes for OPM to process retirement paperwork (usually about six months). The root of this problem is inherently an IT one because it exists in the agency’s inability to digitize the process, but not for a lack of trying. All that being said, OPM has made decent progress in 2020 with the backlog.

The House Appropriations committee, regarding tech issues, asked for a report on Federal Telework Programs as teleworking has immensely expanded since the pandemic hit. Congress reminded OPM that the Telework Enhancement Act mandated specific reports on the effectiveness, challenges, and progress of federal agencies in this digital environment that is heavily reliant on the internet. The matter of the ‘USA Learning Knowledge Portal Services Program,’ which supports online education for feds, was brought up. However, that program deals more with hiring, so it will be discussed in a follow-up article coming later this week about the committee’s concerns with hiring in the Federal Government.