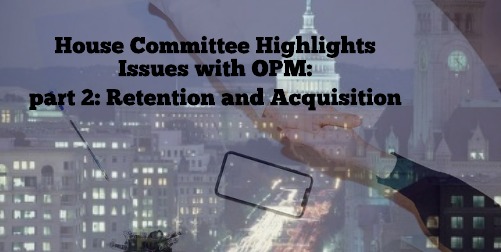 The four main points about acquiring and keeping talent for federal positions were:

More issues were also brought up by the group of representatives in their official statement. While most of the items were tied to either IT or hiring, a range of matters were discussed, including:

The Federal Employee Health Benefits (FEHB) Program’s low coverage of ‘medical food’ had its legality questioned per definitions in the 1983 Orphan Drug Act.

Pay disparities among hourly workers employed by the federal government in different ‘Federal Wage System’ areas within the same locality spurred the committee to ask OPM into consolidating these areas into one. This would make each locality under its own, single wage system area.

Regarding the reorganization of OPM, which the Trump Administration attempted through a merger with the General Services Administration, the congressional statement noted that the 2020 National Defense Authorization Act prohibits such a transfer until 180 days after a budgetary report on the proposed restructuring is submitted to Congressional Committees.

The last two items, which are about the constituency services backlog and minority-owned investment service companies, will be featured in the concluding article about the appropriations committee’s stance on OPM subjects.