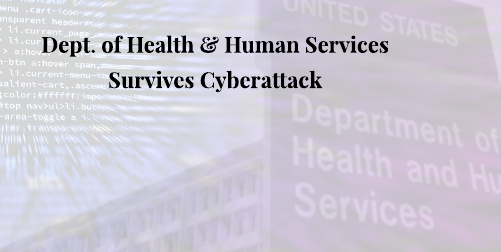 HHS Hacked: The Dept. of Health & Human Services was hit with a cyberattack during the late night hours of March 15th- threatening the country’s response to the Coronavirus outbreak.

There are two types of cyberattacks that are frequently attempted by bad actors across the web- a straightforward ‘hack’ and then a Distributed Denial of Service  (DDoS) attack. Although both are often placed under the broad umbrella that is the word “hack,” the technical definition of a “hack” is any technique that bypasses a computer system’s security to gain unauthorized access to that system. More often than not, that access is desired to carry out malicious intents. The second type of cyberattack, the DDoS type, does not try to infiltrate a digital mainframe, but rather overload it with unsuccessful log-ins. The main tool used in a DDoS effort are bots. These programs are unleashed not to get forbidden access, but with hopes of flooding the target system to the point where servers crash and the system itself slows, or even shuts, down.

On the night of Sunday, March 15, one of the DDoS attacks via bots was attempted. The target was the Department of Health & Human Services (HHS). What is worrying to officials close to the case is not that the attack was attempted, but that it was not the first such attempt on the HHS system since the COVID-19/Coronavirus outbreak. The FBI has not issued a comment. The source of the cyberattack is unknown, but there have been public speculations that the nefarious party is of international origin. Around the same time that the DDoS bots were flooding the HHS website, fake text messages were getting sent across the country announcing a “national quarantine” or in some cases, a “national lockdown.” While claiming to be messages from the CDC or HHS, this was quickly refuted by the White House National Security Council’s twitter page. What is still unknown, however, is if the text message and bots were part of a coordinated effort to paralyze the HHS as the agency deals with the spread of COVID-19.