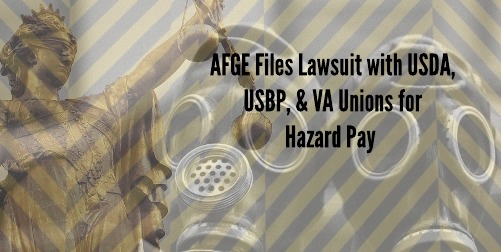 The US Department of Agricultural (USDA), US Bureau of Prisons (USBP), and the Department of Veteran’s Affairs (VA) jointly filed a lawsuit through their respective unions, along with AFGE. The workers represented in the complaint, which was filed on March 27th in Federal court, argue they are owed a 25% pay increase. OPM regulations, written within the Federal Code, state a 25% “hazard pay” is due for workers who came in close range of the COVID-19 virus because it is- in the terms used by OPM- a “virulent biological.” The court document states the pay should take effect when the country’s first case of the coronavirus was confirmed: January 27th.

The main argument in the lawsuit revolves around a lack of available safety equipment, further increasing the risk of infection due to insufficient protection. The case details three individual incidents from each of the represented agencies, one occurring on March 2nd when a USDA employee came into contact with infected materials at a food industry facility. The location was the workplace of an employee who hosted the contagion.

Plaintiffs in the Federal court case may have been hoping the 25% bump in pay would be included in the $2.2 trillion stimulus, CARES Act because some Democratic Congressmen had fought for it- but did not prevail in those efforts. The President of AFGE noted that she hoped this would be resolved by Congress, however, saying “It is our hope that the Government does right by these employees.”