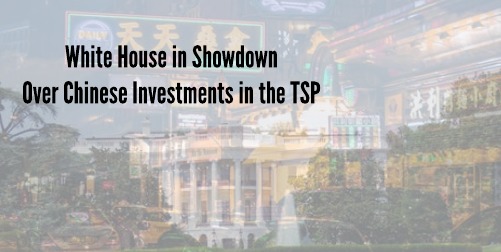 The President aims to replace three TSP Board Members, hoping to stop I-Fund Investment Change that would include businesses in China.

This past weekend has brought additional media attention to the potential inclusion of Chinese companies in the federal employee retirement plan known as TSP. The Thrift Savings Plan, commonly referred to as TSP by millions of federal employees, is scheduled to change the index that its I fund is tied to in the coming months. While there has been opposition to the change in some Congressional circles for months, the pressure is now mounting as the White House is exploring options for retribution against China in response to their early handling of the Coronavirus and other economic threats against the U.S.

Following is a brief background leading up to today’s headlines. In 2017 the Federal Retirement Thrift Investment Board voted to change the index that the I fund follows to a more broad-based index which would include both developed and emerging markets overseas. China falls into the emerging markets asset class. Currently, the I fund primarily tracks developed countries overseas with a large percentage of the allocation in Europe. The change to the new index was recommended after a review of the plan by Aon Hewitt, an independent consultant hired to assess the plan. TSP is the largest defined contribution plan in the world with over $557 billion in employee assets and over 5.1 million participants. The change to the I fund would bring the plan more in line with private sector counterparts which offer emerging markets as an asset class. The largest publicly traded companies in the U.S., as well as the largest federal contractors, and largest state pension systems all offer the emerging markets asset class to their retirement plan participants. Further background information can be found in my previous article.

Fast forward to last week when President Trump nominated three members to replace the majority on the board which oversees the TSP. Plan oversight is done by a total of 5 board members. The three seats the President nominated for are all currently held by persons whose 4-year terms have expired. The two other seats are controlled by the leaders of the House of Representatives and the Senate. If these three seats are replaced, the stage could be set to reverse the 2017 decision and keep feds from accessing the emerging market asset class as a whole. Currently, it is estimated that 48 additional countries would be available to employees with the index change. Only one of the 48 would be China.

Those in favor of the change, which include representatives of various federal employee associations argue that in the private sector, participants are provided with the opportunity to invest in emerging markets. In addition, the suggested changes would provide the opportunity for greater diversification within retirement accounts. Those who oppose the change argue that with the inclusion of Chinese companies, federal employees could be supporting companies that are directly tied to the Chinese military and intelligence operations.

Indications are that the President is working on a backup plan in case he cannot quickly get Senate approval for his nominees. As federal employees work to maintain the operations of our government during these times, it is important to ensure those charged with the handling of their retirement savings are working in their best interest. As always at Serving Those Who Serve, we will be watching this play out over the coming weeks with our federal employee’s best interests in mind.

Update: The TSP Board voted to postpone the implementation of the change that would’ve added Chinese investments to the TSP’s I-Fund

**Written by Jennifer Meyer, Financial Planner. The information has been obtained from sources considered reliable but we do not guarantee that the foregoing material is accurate or complete. Any opinions are those of Jennifer Meyer and not necessarily those of RJFS or Raymond James. Any information is not a complete summary or statement of all available data necessary for making an investment decision and does not constitute a recommendation. Investing involves risk and you may incur a profit or loss regardless of strategy suggested. Every investor’s situation is unique and you should consider your investment goals, risk tolerance, and time horizon before making any investment or financial decision. Prior to making an investment decision, please consult with your financial advisor about your individual situation. While we are familiar with the tax provisions of the issues presented herein, as Financial Advisors of RJFS, we are not qualified to render advice on tax or legal matters. You should discuss tax or legal matters with the appropriate professional.**