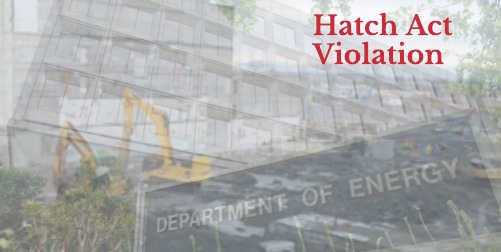 The Nuclear Waste Program at the Hanford Nuclear Reservation in Washington State is a controversial location in the Northwest corner of the country. From 1945 to 1987, the Federal Government utilized the facility to produce plutonium for the country’s stockpile of nuclear weaponry. Since then, the prominent activity of the Hanford Reservation is cleaning up all the nuclear waste. In 2017, hundreds of DOE employees were warned to take cover” when a tunnel collapsed within the underground site. Radioactive material that may cause cancer, brain damage, and respiratory issues, according to some reports, leaks from 60 of the 177 tanks containing the waste. 61 workers reported breathing the lethal fumes in 2016. This has led to the location garnering nicknames like “an underground Chernobyl” and “the most toxic place in America.”

As such, the property receives attention from national and local politicians, including Senator Maria Cantwell- who was adamant about touring the location in April 2019. The DOE repeatedly denied her requests and cited Hatch Act violations as the reason a private tour of the program could not be allowed. Persistence won out, however, as the request was eventually honored. Last month, the Federal worker who gave that approval agreed to resign and accept a 3-year debarment from working for the Federal Government. Because of the media coverage of the event, and the information it provided, it could be perceived as a political act geared to further the Senator’s campaign for reelection- and this violates the Hatch Act. This legislation, which was ratified in 1939, usually pops up around election time when Federal agencies are reminded that political activity is not allowed when on the clock for Uncle Sam. This surmounts to not being able to put any campaign promotions on your desk.