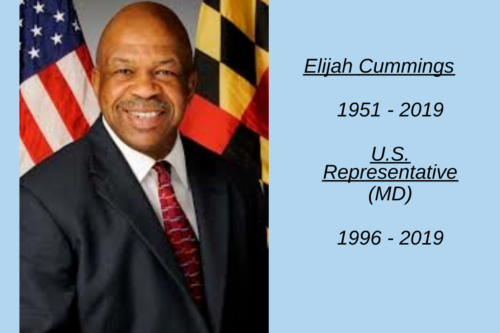 Remembering Elijah Cummings, the Maryland Congressman who passed away on October 17, 2019.

Since 1996, Elijah Cummings served the American public as a member of the US House of Representatives from Maryland’s 7th district. This service did not cease until he passed away from “longstanding health challenges” on October 17, 2019. He was honored by colleagues in the Capitol Building the following Thursday, and there was a memorial service the day after that.

Before arriving on Capitol Hill, he served in the Maryland House of Delegates from 1983 to 1996. Both the American Federation of Government Employees (AFGE) and the National Active and Retired Federal Employees Association (NARFE) released official statements honoring Senator Cummings’ lifelong dedication to providing strong support for Feds.

While his contributions to the public were innumerable, recent examples include the passing of the TSP Modernization Act and filing an amicus brief to support an AFGE lawsuit against the Trump Administration. The legal complaint was regarding executive orders that were seen as “anti-worker.”

Here is an excerpt from Ken Thomas, President of NARFE:

“Our condolences are extended to his family, friends, staff, House and Senate colleagues and the entire federal community, particularly NARFE’s Maryland Federation, whose experience and connection with him allowed its members to see firsthand how advocacy in the policymaking process benefits the public good.”