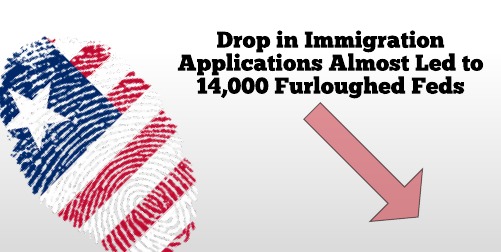 The USCIS was provided fiscal relief by Congress in the form of $1.2 billion in emergency funding for its parent agency, the Department of Homeland Security (DHS). $189.3 million from that bill prevented 14,000 Federal workers from getting furloughed. Union leaders, like Everett Kelly of the American Federation for Government Employees (AFGE), worked with Congress to stop the staffing reduction measures, which were scheduled to hit on August 3rd.

The immigration agency receives a large chunk of its funding from application fees for processing visa, citizenship, and green card requests. The coronavirus crisis has disrupted this cashflow in a variety of ways. First, fees aren’t collected until after the application process is complete. In some situations, a face-to-face interview is required by law, so the pandemic’s closing of federal facilities effectively halted those applications from moving forward. Second, the Trump Administration put a hold on green card requests for both immigrants requesting permanent residency in the country, and those who are already living in the United States. However, there is an exemption list for matters of national security and health. And the third prominent reason for the drop in applications stems from the fact that the country has seen the most deaths from COVID-19, by far, than any other country. As of Friday, July 24th, the USA has reported 147,865 deaths from the virus, more than 63,000 more than the country next on the list, Brazil. Therefore, those who may have been considering immigration to the states are now thinking otherwise.

Fiscal years 2015, 2016, and 2017 saw relatively similar numbers of such incoming applications at approximately 7.7 million, 8.1 million, and 8.5 million, respectively. It works out to roughly 2 million per quarter- a statistic that essentially shrunk by half in the following 10 quarters, from October 2017 to the end of March 2020, which was right as the impact of COVID-19 was becoming realized by the public. So, there is not much short-term data on the matter except for an anonymous quote from a USCIS employee that claims to have recently seen “a shockingly low amount of applications.”

As well, on July 14th, the AFGE National President said, “We’ve never seen anything like this.” Lasting from 30-90 days, the furloughs that would have impacted 14,000 federal employees at USCIS would not have been like the furloughs experienced amidst recent government shutdowns, where historically there has been backpay for those furloughed.