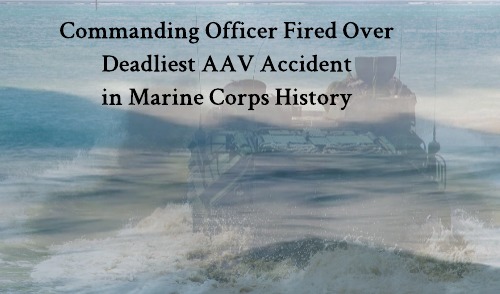 An AAV Accident left 1 Marine Fired, 1 Marine Dead, and 7 others missing. A Navy Sailor also passed away in the accident.

A July mission to transport military personnel turned disastrous in the Pacific Ocean. Little public details are available about what went wrong in transporting 15 marines and 1 Navy sailor in an Assault Amphibious Vehicle (AAV) from San Clemente Island, which is off the coast of San Diego, CA, to a Navy ship. But bits of information are leaking out. An October press release from the Marine Corps revealed that Lieutenant Colonel Michael J. Regner had been released from his duties as a Marine in connection with the July 30th accident. The commanding Officer of the 15th Marine Expeditionary Unit (MEU), which is responsible for crisis and contingency response training, was discharged due to a “loss in trust and confidence in his ability to command” based off undisclosed actions he took that supposedly led to, or at least failed to prevent, the AAV crash. Seven of the marines involved, including Regner, survived.

An extensive search in August discovered the sunken vehicle and inside, human remains. Lance Corporal Guillermo S. Perez died from injuries after initially being rescued with the seven survivors. He was 20 years old. US Hospitalman Christopher Gnem of California was the sole Navy sailor onboard, and was one of the eight missing military members. Gnem and the 7 missing Marines were officially announced to be presumed dead in August, after an exhaustive search of the nautical area was conducted, and decomposing bodies were discovered in the sunken vehicle.

The 15th MEU operates out of Camp Pendleton, which is between Los Angeles and San Diego. Although probably just a coincidence, this is the same general area of the ocean where Navy pilots spotted UFOs in 2004, and the DoD confirmed the veracity of those occurrences this past spring. With minimal details available about the AAV accident, however, any conjecture is plausible. The former Lt. Col. Regner has been deemed at fault, so more likely than extraterrestrials, the deadliest AAV accident in Marine Corps history was probably caused by an oversight or other type of mishap on Regner’s part. The investigation is ongoing.

**Written by Benjamin Derge, Financial Planner. The information has been obtained from sources considered reliable but we do not guarantee that the foregoing material is accurate or complete. Any opinions are those of Benjamin Derge and not necessarily those of RJFS or Raymond James. Links are being provided for information purposes only. Expressions of opinion are as of this date and are subject to change without notice. Raymond James is not affiliated with and does not endorse, authorize, or sponsor any of the listed websites or their respective sponsors.﻿