Biden Promises to Support Federal Employees and Their Benefits, if Elected 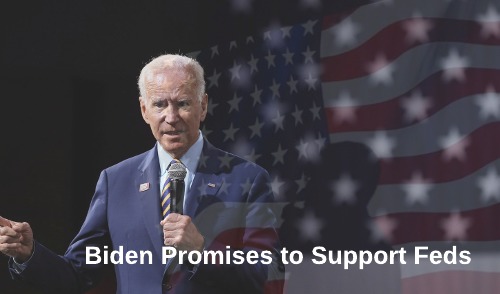 In response to a NARFE questionnaire, Presidential Nominee Biden Promises to Support Feds and not cut their Benefits

The Trump Administration declined an invitation from the National Active and Retired Federal Employee Association (NARFE) to fill out a questionnaire on how their presidency would treat the benefits of Federal workers. However, if the current president’s previous budgetary recommendations provide any indication of what would be done should Trump have a second term, then it can be assumed he would continue to pursue items such as eliminating COLAs and raising employees’ contributions to their pension.

Via the questionnaire, the Biden campaign expressed a desire to protect the federal civilian workforce and their benefits. In addition to keeping COLAs in place for Social Security recipients plus CSRS and FERS annuitants, the Democratic nominee wants to switch the index that determines what any Cost-of-Living Adjustment would be. Currently, it is based on the CPI-W (Consumer Price Index for Wage Earners and Clerical Workers), however under Biden’s plans, it would be changed to Consumer Price Index for the Elderly.

Biden also promised to provide regular federal pay raises. While Feds did receiveraises in 2018, 2019, and 2020, it was in spite of the executive branch’s wishes to enact a pay freeze across the board. Arguably, the 1.6% raise in 2019 wouldn’t have happened had the government not endured a lengthy shutdown that furloughed around 800,000 feds. Biden also wrote that his administration would move away from the Trump initiatives to increase employee contributions to pensions and transform the “high-3” pension calculation to the better sounding,although less advantageous, “high-5.” Currently, FERS employees hired before 2013 contribute 0.8% of their salary to their retirement while those hired after (named either FERS-RAE or FERS-FRAE) contribute either 3.1% or 4.4%. The Trump Administration has frequently showed interest in upping this number to 6% or 7% for new hires. The current “high-3” calculation determines a federal annuitant’s monthly retirement payment using their 3 highest paid years’ pay rate. The “high-5” would make that into 5 years, which in almost all cases would reduce the payout in retirement.

Biden’s responses also indicated that his administration would seek the elimination of penalties such as the Government Pension Offset and the Windfall Elimination Program, which adversely affect CSRS retirees. For FERS, Biden wrote he wouldnot get rid of the Special Retirement Supplement for Feds who retire before age 62- another item the current White House has recommended eliminating. In contrast, the former Vice President would even want to expand social security benefits for all Americans who contribute to and benefit from the program.

**Written by Benjamin Derge, Financial Planner. The information has been obtained from sources considered reliable but we do not guarantee that the foregoing material is accurate or complete. Any opinions are those of Benjamin Derge and not necessarily those of RJFS or Raymond James. Links are being provided for information purposes only. Expressions of opinion are as of this date and are subject to change without notice. Raymond James is not affiliated with and does not endorse, authorize, or sponsor any of the listed websites or their respective sponsors.﻿

Ready to Retire? A Glance at the First Year of Federal Retirement