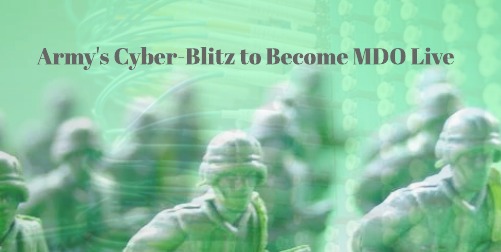 Cybersecurity, including the rapidly growing field of Artificial Intelligence (A.I.), has become a much larger focus in US military operations in the past decade. This has been seen in both the Federal Government’s increased efforts to hire in the digital security field and the current administration’s executive order from 2019 that ramped up the government’s involvement with A.I. In 2016, the Army started an annual event entitled Cyber-Blitz that consisted of “experiments to synchronize Science & Technology prototypes, technology concepts and investments with Acquisition, TRADOC, Operational, and total Army priorities.” In 2017, for instance, the event focused on the integration of Cyber and Electromagnetic Activities (CEMA) within adverse computational operating environments. Two years later, the event evolved to a more significant status amongst the Army’s various activities as it participated in a ‘tier 1 exercise,’ a designation reserved for the military’s highest priorities.

Also in 2019, a tactical cyber team was created: the 915th Cyber Warfare Battalion. Since its inception, it has become clear the team needs more manpower. Thus, it was announced during the 2020 Cyber-Blitz event that it would be the last occurrence under that name. Starting next year, the event will officially transition to what will be called “Multiple-Domain Operations Live.” The multiple domains referenced are to the types of military conflict: competitive, armed, kinetic, and non-kinetic. The US Cyber Command Mission is completely different from, but often confused with, the MDO (multiple domain operations). The Cyber Command is a combined team that works for numerous military branches (Army, Navy, Air Force, etc.- but not the Space Force), and performs cyber missions from a remote, undisclosed location(s).

The MDO is solely a piece of the Army and looks to test a variety of technology for use in various domains. The competitive domain revolves around keeping pace with our international peer’s level of digital capabilities. Armed conflict, similar to kinetic warfare, revolves around wartime scenarios where lethal force is used in ‘acts of war.’ In contrast, non-kinetic domains include diplomatic, cyber, espionage, and other operations where more traditional ideas of warzones (active combat) are not included. The MDO Live event is designed to support the battalion-sized detachment known as I2CEWS (intelligence, information, cyber, electronic warfare, and space), which will help battlefield commanders with the areas that are contained in their name.