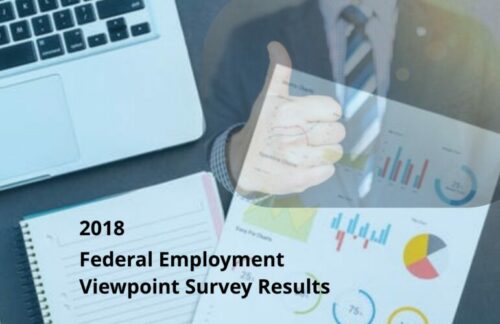 Every year, the Office of Personnel Management (OPM) conducts a government-wide survey to gauge job satisfaction among Federal Employees. For 2017, 45% of 1,068,151 federal employees who were invited to complete the questionnaire did so. In 2018, a lower portion- 40% – responded. The data set was larger this go-around, though, with 1,473,870 feds asked to contribute, meaning there were approximately 112,000 more replies despite a 5% drop in the participation rate. Interestingly, the Department of Veteran Affairs opted to perform their own satisfaction survey in 2018 and were not included for the 2018 data.

The Federal Employee Viewpoint Survey (FEVS) first shows something that has nothing to do with the respondents or viewpoints: demographics. For instance, 44% of Feds are female, which is a tumble from 49% in the prior year. 1% belong to the ‘Silent Generation’, 35% are Baby Boomers, 43% belong to ‘Generation X,’ and 18% of the federal workforce are millennials- or younger. 27% of Feds have served for over 20 years.

90% of the completed surveys indicated that the government’s civil servants believe their work is important, are actively looking to improve, and are willing to put in an extra effort. Over 80% of respondents also felt their supervisor respects and supports them.

Less promising, fewer than 40% of workers feel there are prospects for promotions within their agency. A similar portion of the survey results expressed that adequate awards are given for positive performance, creativity, and innovation. Also discouraging, the data suggests that more than 60% thought poor performers weren’t handled effectively, didn’t feel their efforts were being recognized in a meaningful way and believed promotions were doled out based more on trivial factors than those of merit.